Mick and Barrie did some coaching to develop a team at Ashton, which would later become Ashton Alligators. These were a new team in the 2001 season in the Yorkshire League and started the season at a level where the Sheffield 'B' team could 'paste' them comfortably. They made it into the top division finishing 8th overall and getting a few teams worried. They rightly took the trophy for the most promising team.
2001
Mantas team played in Sheffield Tournament against teams from Sheffield (winners), Batley/Huddersfield and Aston/Stockport.
Ex member Janet Robinson was chosen to compete with Europe’s best for the England squad in Yugoslavia
2002
May 11th - Mantas played in 7th U13 National Championships at Manchester Aquatic Centre and came 6th against teams from Dunstabubblers (Winners), Guildford Gremlins (Runners-up), Orkney Storms, Sheffield Stingrays, Huddersfield Sharks, Tarot Tornadoes, Plymouth Pirates, Newcastle Nemos, and Pembroke Pihranas
Winners of Yorkshire Junior Octopush League. Against teams from Batley, Sheffield, Huddersfield, and Leeds. Rochdale Team: M Dawson, N Dawson, A Dawson, L Whitehead, T Gilligan, A Gilligan, J Daveron, C Platt, J Bostock and P Fielding. 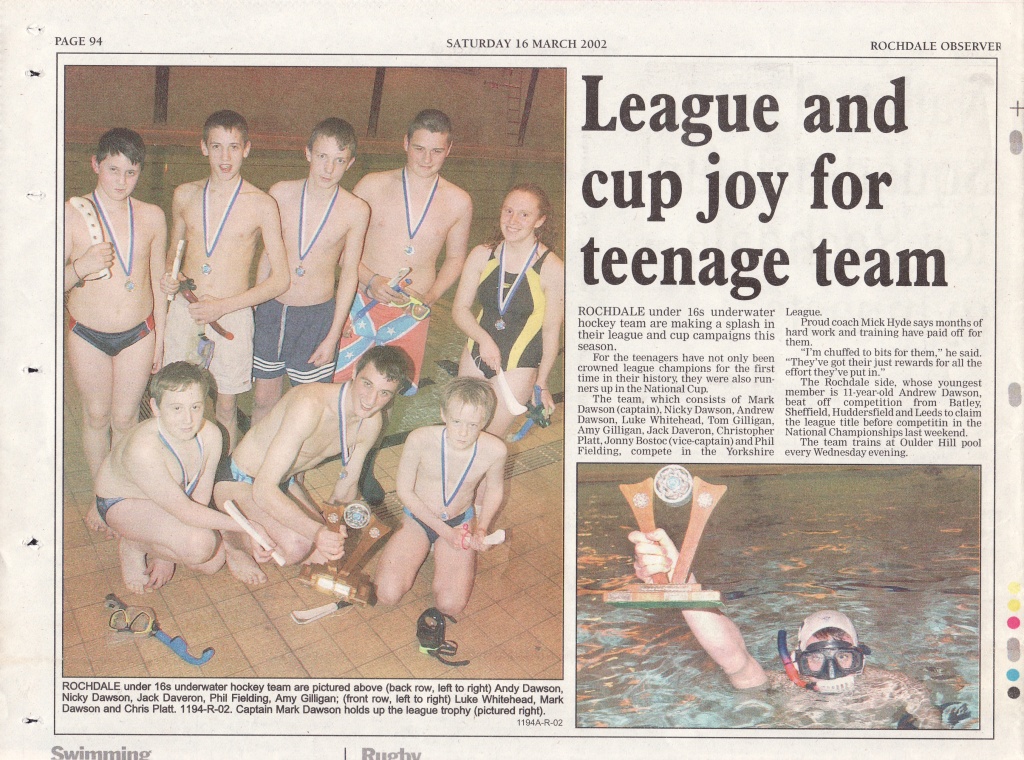 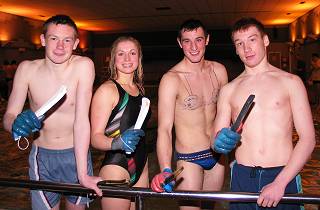 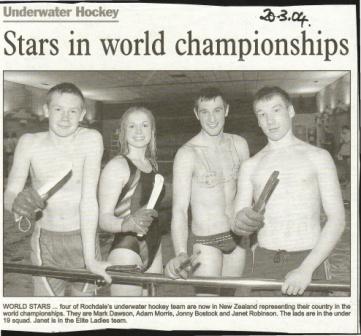 Mark also organised a 6 team fund raising tournament at Wardle High School to raise money for travel and equipment to the Championships. Teams participating were Batley (winners), Yorkshire Ladies, Manchester (2nd), Edinburgh University and Bangor University.
June 5th – U13 National Tournament at Loughborough University
August 2nd - 14th – Took part in Rochdale Council Go Clubbing Event at Oulder Hill, introducing 26 new participants to snorkelling & octopush.
2005
October – The U13 and U16 teams enjoyed success at Dukinfield Pool against Tameside Juniors. The U13 team (Members J Wright, E Barnes, N Nelson, R Graham, J Darwin, A Platt and M Grindrod) won 9-1 and the U16 team (N Morris, S Darwin, G Wright, G Bostock, S Grindrod, M Grindrod, D Layburn and A Platt) 9-0
The senior team won the Edinburgh Invitational Tournament by winning every match and conceding only 2 goals against teams from  Aberdeen,  Sterling and Manchester and Edinburgh's 3 teams.
2006
The club did not participate in any tournaments during this year
2007
Due to closure of Oulder Hill pool during 2007, sessions were held at Rochdale Central Baths jointly with Rochdale SubAqua Club
2008
March - Junior members swam 2 miles underwater to raise over £400 for Sport Relief
May – U16’s team beat Huddersfield 6-4 Team: T Griffiths, F Mottershead, C Wilson, A Chapman, O Jackson, E Mottershead, J Watson, J Wright, Z Tait.
May - Former member Mark Price, who started with Rochdale when he was 13, now lives and plays in Glasgow played for Great Britain at the European championships in Turkey in May. They finished in second place, winning silver medals. Mark was the top goal scorer for GB.
June - U16’s team at Junior Nationals Semi Finals Tournament at Loughborough University came 4th in Group 1 Round Robin against teams from Team South West (winners) Plymouth Pirates (2nd), Orkney Vikings (3rd) and Team South East, and were placed 7th in the finals overall.
July – Natalie Morris was selected to play for the England Under 19’s Team for the Home internationals which took place in July. They finished just outside the medals in 4th place. This was a great achievement for her as she was just 16 and had another 2 years to play at Under 19 level.
Mark Dawson and Neal Dunkinson, both former juniors who started at Rochdale when they were aged 10 or 11 now play for Southport. In this year’s National Championships, played in a 3 metre deep pool, Southport became National Champions with Mark scoring 5 goals in their 7-3 win over Team Ealing in the final.
The Senior Team entered the Nautilus National Competition held at Sheffield recently. This was the first time for several years that a team had been entered and after 7 very tiring matches, Rochdale were successful in winning Division 4 and receiving a cup and gold medals all round.
November 22nd - Four members of the Senior Team who are all aged 16 and 17 entered an under 19 competition held in Basingstoke recently. Rules were 4 in the water from a squad with up to 8 members. Rochdale only had 4 players there, so it was simple, no substitutions to worry about, play until you drop!! They finished 2nd overall and congratulations go to George Wright, Jack Yule, Brendan Greer and Natalie Morris who captained and organised the team.
2009
January 24th – 3 of our players took part in this competition, joining forces with some players from Batley club, to make a team called “Rochley”. All three put in a lot of effort, for Oli Jackson and Ivon Haywood it was their first competitive matches and they did very well against teams that were generally bigger, stronger and certainly more experienced than they were. Zach Tait got some cracking goals and was generally first to the puck on every rally.
The tournament attracted 7 teams : from Solent (Winners), Orkney (Runners-up), Newcastle (Nemo), Manchester (Xarifa), Rochdale, Huddersfield and Batley.
February - North of England and Scotland Junior Tournament-Miles Platting Pool, Manchester. Team members : Charlotte Watson, Jamie Watson, Robert Scott, Elliott Fleming, Michael Grindrod, Anthony Platt, Zach Tait, Oli Jackson, Ivon Haywood, Joe Gettings. Result not recorded.
April 9th – Senior team played in 50th National Octopush Championship Group A round robin at Ponds Forge, Sheffield coming 6th against teams from Southport, South West, Leeds, West Wickham, West London B and Mansfield.
Former member Keith Dunkinson stepped down from the post of BOA National Squads Manager.
At the World games in Slovenia former member Janet Robinson captained the Ladies Elite squad who convincingly beat South Africa Ladies 7-2 in the final to win GOLD having not been beaten in any of their previous games.
Two former members (Mark Price who was Vice captain and Neal Dunkinson) played for the Open Elite Squad who after a tense play off against Turkey achieved a magnificent third place earning them bronze medals behind France (Gold) and South Africa (Silver).

In small groups, swimming relays, the juniors swam a total of 320 widths underwater in Oulderhill Pool to raise over £750 for Sport Relief.

A lot of the young people participating in this charity event, had only recently joined the snorkelling club and it was a major achievement for many of them to be able to complete just one width underwater.  Most of the people taking part completed at least 10 widths and some did in excess of 20, which enabled the club to exceed our target in just under 20 minutes.

A former Rochdale junior player, Mark Price who had recently been selected for the Great Britain Squad, took part in a challenge to swim a mile underwater individually in Glasgow over the weekend.  Along with two members of the GB Ladies Elite Team they each swam 71 lengths of a pool.

Former member Keith Dunkinson stepped down from the post of National Squads Manager to devote more time to his family.